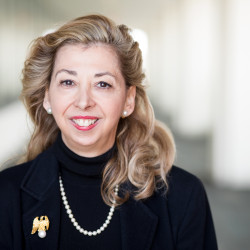 This is an archived page. Laura Peter was the Deputy Under Secretary of Commerce for Intellectual Property and Deputy Director of the United States Patent and Trademark Office until January 2021. View a current list of USPTO executives and their biographies on the Executive committee webpage.

Prior to joining the USPTO, Ms. Peter was the Deputy General Counsel of A10 Networks, a publicly-traded IT company where she oversaw daily legal matters related to commercial agreements, litigation, and intellectual property (IP) portfolio development. In 2014, she helped shepherd the company through its initial public offering.

Recognized by World IP Review as one of the most “Influential Women in IP,” Ms. Peter has practiced IP law for over 20 years. Previously, she was Vice President and General Counsel of Immersion Corporation, where she led all aspects of the company's legal issues, including its IP portfolio. She was also Assistant General Counsel and Director of Intellectual Property at Foundry Networks, where she built a successful patent portfolio and litigation program. She began her career as a commercial and IP litigator at Townsend, Townsend and Crew (now Kilpatrick Townsend & Stockton LLP).

Ms. Peter received a Bachelor of Science in industrial engineering from Cornell University and a master's in public policy from the University of Chicago. She also holds a Juris Doctor from Santa Clara University School of Law and a Master of Law degree in international business law from King's College London.