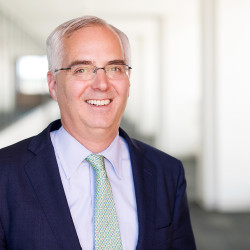 This is an archived page. Joseph Matal was the Acting Deputy General Counsel for Intellectual Property Law and Solicitor until January 2019. View a current list of USPTO executives and their biographies on the Executive Leadership page.

As an Associate Solicitor in the USPTO’s Office of Solicitor, Mr. Matal briefed and argued appeals of patent and trademark decisions before the U.S. Court of Appeals for the Federal Circuit and the U.S. District Court, and assisted in the development of legal positions taken by the U.S. Solicitor General in patent and copyright cases before the U.S. Supreme Court. Mr. Matal also served as acting Chief of Staff for the agency and has advised the director on legislative matters.

Mr. Matal previously served as the General Counsel of the Judiciary Committee for former Senator Jeff Sessions (R-AL), and as a Judiciary Committee Counsel to former Senator Jon Kyl (R-AZ). In that role, he was the principal staff drafter and negotiator of legislation that became the Leahy-Smith America Invents Act, the first comprehensive patent law overhaul since 1952. He has a bachelor’s degree from Stanford University and a law degree from the University of California, Berkeley.