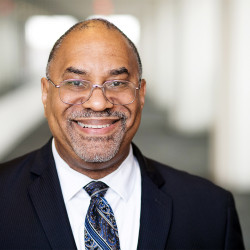 This is an archived page. David Chiles was the Chief Information Officer until February 2019. At that point, he returned to his permanent position as Chief Technology Officer. View a current list of USPTO executives and their biographies on the Executive Leadership page.

David Chiles is the acting Chief Information Officer (CIO) for the United States Patent and Trademark Office (USPTO). In this role, he is the principal advisor to the agency on the design, development, and management of its information systems and technology. He is focused on fueling innovation, optimizing business results using technology, and enabling IT operational excellence.

Since joining the USPTO in 2009, Mr. Chiles has served as Director for the Patents Systems Division, Director of the Office of Application Engineering and Development, and is currently the Chief Technology Officer in addition to acting CIO. With more than 30 years of experience in the high-tech industry, he has served in various engineering, IT leadership, and entrepreneurial roles. His innovative insights prior to coming to the USPTO led to him earning more than 20 patents.

Mr. Chiles is a native of Washington, D.C., and currently lives just outside the District in Maryland with his wife. A strong supporter of veterans, he initiated an annual hiring fair at the USPTO to recruit the talented men and women who faithfully serve the United States.