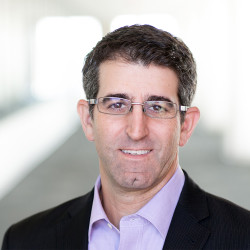 Director of the Office of Governmental Affairs

This is an archived page. Dana Colarulli was the USPTO Director of the Office of Government Affairs until May 2019. View a current list of USPTO executives and their biographies on the Executive committee page.

Dana Colarulli is the Director of the Office of Governmental Affairs and a member of the executive management team at the U.S. Patent and Trademark Office, which he joined in December 2009.  He has two decades of experience working in and with the federal government and the U.S. Congress in various roles.  Though these various positions, Mr. Colarulli has facilitated discussions addressing a wide range of substantive and operational issues related to intellectual property law and policy and to the U.S. government.  While in his current position, Mr. Colarulli facilitated discussions within the agency, on Capitol Hill and with the public related to a variety of reforms of the patent and trademark systems including enactment and effective implementation of the Leahy-Smith America Invents Act (Public Law 112-29), international treaties, and on recent proposals to address abusive patent litigation.  He has also coordinated USPTO personnel and resources to support operations at the USPTO and its annual budget requests, authority to access fee collections, and increase the USPTO's spending authority.

Before serving at the USPTO, Mr. Colarulli was the Director of Government Relations for the Intellectual Property Owners Association (IPO) for seven years, a national trade association representing owners of patents, trademarks, copyrights, and trade secrets where he engaged directly with chief IP counsels from more than 200 companies as well as practitioners from around the country supporting domestic legislation and facilitating international advocacy efforts. Prior to this position, Mr. Colarulli served on Capitol Hill as a law clerk for Senator Maria Cantwell from Washington State addressing technology and IP issues in front of the Senate Judiciary Committee.

Mr. Colarulli also worked at the Washington, D.C. law firm of Verner, Liipfert, Bernhard McPherson & Hand (now a part of DLA Piper Rudnick) in the Federal Affairs and Legislative Practice Group where his clients included small internet startups, associations, and large corporations with intellectual property and internet-related interests.  Prior to this position, he served in the federal government for five years in the U.S. Small Business Administration’s Office of Entrepreneurial Development and at the U.S. Department of Health and Human Services, Administration for Children and Families in various positions.

Mr. Colarulli was born in Rhode Island and is a member of the Massachusetts Bar.  He received a Juris Doctorate from American University’s Washington College of Law in Washington, D.C. and a Bachelor of Arts from Boston College in Chestnut Hill, Mass.