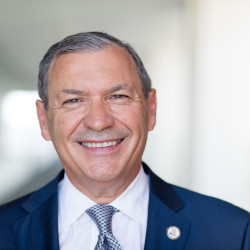 As the Regional Director of the Elijah J. McCoy Midwest Regional United States Patent and Trademark Office (USPTO) since September 2018, Damian Porcari carries out the strategic direction of the Under Secretary of Commerce for Intellectual Property and Director of the USPTO while leading the Midwest regional office in Detroit. By focusing on the region and actively engaging with the community, Mr. Porcari ensures the USPTO’s initiatives and programs are tailored to the region’s unique ecosystem of industries and stakeholders.

From 1989 to 2017, Mr. Porcari worked for Ford Global Technologies LLC (FGTL) in Dearborn, Michigan, serving as its Director of Licensing and Enforcement from 2005 to 2017. In this role, he was responsible for protecting and monetizing Ford’s IP across the globe through licensing and litigation. Mr. Porcari also served as FGTL’s Director of Technology Commercialization, where he led a team to develop marketing strategies and oversee licensing of the company’s technologies. He also served as a Senior Patent Attorney for the U.S. Army Tank-automotive Command in Warren, Michigan, from 1984 to 1989.

Mr. Porcari is a named inventor on five U.S. patents. He was born and raised in Detroit, where he attended Detroit Public Schools. A steadfast supporter of STEM initiatives in the region, Mr. Porcari has volunteered at Detroit-area Camp Invention programs for over 20 years. He received a Bachelor of Science in chemistry from Michigan State University and a Juris Doctor from the University of Detroit Mercy School of Law.