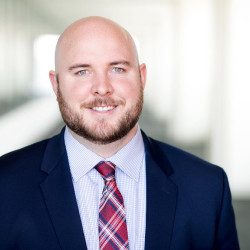 This is an archived page. Christopher Shipp was the Chief of Staff of the United States Patent and Trademark Office until January 2021. View a current list of USPTO executives and their biographies on the Executive committee page.

Christopher Shipp is the Chief of Staff for the United States Patent and Trademark Office (USPTO). Mr. Shipp serves as the Director’s principal advisor and helps coordinate a $3.5 billion budget in support of the bureau’s nearly 13,000 employees to execute the daily operations, policies, priorities, and global communications of the President’s intellectual property agenda. In addition, the Chief of Staff serves on the USPTO’s Executive Committee and manages the day-to-day policy coordination process with the White House, Department of Commerce, and other federal agencies.

Mr. Shipp was previously the USPTO Chief Communications Officer, where he directed a team of media relations, speechwriting, social media, public affairs, and audio-visual design professionals focused on promoting the agency's goals and objectives. He also oversaw the USPTO's partnership with the National Inventors Hall of Fame and management of the National Medal of Technology and Innovation, which is issued annually by the White House.