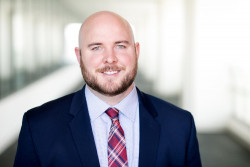 Chris Shipp is the Chief Communications Officer of the United States Patent and Trademark Office (USPTO). He is responsible for the development and implementation of strategic communications for the USPTO in coordination with the U.S. Department of Commerce and the White House, and he supports and advises the Under Secretary of Commerce for Intellectual Property. He is also currently the Acting Chief of Staff for the USPTO.

As Chief Communications Officer, Mr. Shipp directs a team of media relations, speechwriting, social media, public affairs, and audio-visual design professionals focused on promoting the agency's goals and objectives. He also oversees the USPTO's partnership with the National Inventors Hall of Fame and management of the National Medal of Technology and Innovation, which is issued annually by the White House.

Mr. Shipp was the USPTO Deputy Chief Communications Officer prior to assuming his current position. He previously ran a public relations consulting company, where he served as the Montana State Director for Donald J. Trump’s 2016 presidential campaign. Mr. Shipp also held multiple positions with the Montana Republican Party, serving as Executive Director and Communications Director over the course of three election cycles.