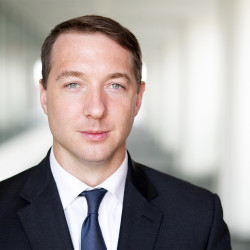 Brendan McCommas is currently on detail to the White House since April 2019. During this time, he is not carrying out Senior Advisor duties for the USPTO.

Brendan McCommas is a Senior Advisor for the United States Patent and Trademark Office (USPTO). He previously served as the USPTO Chief of Staff and as Special Assistant to the Secretary of Commerce. He also served as a patent examiner in Technology Center 2600.

Earlier in his career, Mr. McCommas was an Associate at Bracewell LLP in Houston, Texas, where he focused on intellectual property litigation, patent prosecution, and tech transactions. While in Houston he participated in the Houston Bar Association’s Pro Bono Legal Lines and Veterans Clinic, along with representing underserved communities before the USPTO and in various legal matters. He has a Bachelor of Science degree in electrical engineering from Grove City College, an M.A. in English from Georgetown University, and a J.D. from the University of Virginia School of Law, where he was on the editorial board of the Virginia Journal of Law and Technology.