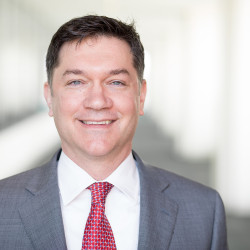 Director of Government Affairs and Oversight

This is an archived page. Branden Ritchie was the Director of Government Affairs and Oversight of the United States Patent and Trademark Office until January 2021. View a current list of USPTO executives and their biographies on the Executive committee webpage.

As the Director of Government Affairs and Oversight, Branden Ritchie is responsible for monitoring congressional activity and facilitating policy proposals related to the United States Patent and Trademark Office (USPTO) and intellectual property issues. He facilitates cooperation with, and outreach to, Congress and other government agencies, and he coordinates USPTO responses to oversight inquiries and investigations.

Mr. Ritchie has nearly two decades of experience working on Capitol Hill, where he served most recently as Chief Counsel and Deputy Chief of Staff for the House Judiciary Committee. In that position, he shepherded into law such intellectual property-related legislation as the Hatch-Goodlatte Music Modernization Act, the Defend Trade Secrets Act, the SUCCESS Act, and many more. For 10 years prior to that position, he was Legislative Director and Counsel to Congressman Bob Goodlatte.

Before his work on the Hill, Mr. Ritchie spent close to three years as a trademark attorney at the USPTO. Born in Harrisonburg, Virginia and a member of the Virginia State Bar, he has a Juris Doctor from George Mason University School of Law and a bachelor’s degree in government from the College of William and Mary.