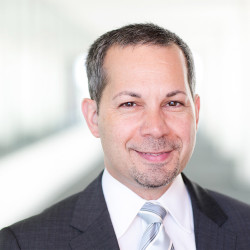 This is an archived page. Tony Scardino was the USPTO Chief Financial Officer until July 2019. View a current list of USPTO executives and their biographies on the Executive committee page.

Anthony (Tony) Scardino is the Chief Financial Officer (CFO) of the United States Patent and Trademark Office (USPTO). As CFO, Mr. Scardino is the principal advisor to the USPTO Director in supporting and improving the accounting, budgeting, planning, and organizational performance systems of the USPTO. His responsibilities include managing the fiscal operations of the USPTO and providing leadership in areas defined by the Chief Financial Officers Act of 1990 and other legislation designed to improve integrity in federal financial management. Mr. Scardino oversees an annual budget exceeding $3 billion.

Prior to joining the USPTO, Mr. Scardino served in several leadership positions at the Department of Housing and Urban Development (HUD), including Acting CFO, Acting Deputy CFO, and Budget Director. In these capacities, he oversaw an annual budget of more than $45 billion, served as a key advisor to the Secretary of HUD, and acted as a principal liaison with congressional appropriators and the White House Office of Management and Budget. His other federal experience includes time at the Federal Bureau of Investigation, the Federal Election Commission, and the Broadcasting Board of Governors, where he successfully implemented a new accounting and payroll system in a fiscally constrained environment. Additionally, Mr. Scardino has spent time with two consulting firms supporting federal finance challenges and served as the Deputy CFO at a federally funded grantee of the U.S. government.

In 2014, Mr. Scardino was the recipient of the Meritorious Presidential Rank Award, given annually by the President to no more than 5 percent of the federal government’s Senior Executive Service in recognition of “sustained extraordinary accomplishment” throughout their executive tenure.